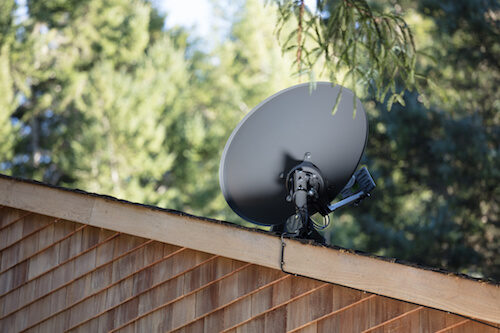 Satellite internet refers to the capacity to send and receive data via a very tiny satellite dish on Earth while communicating with a geostationary satellite orbiting 22,300 miles above the Earth’s equator. The orbiting satellite sends and receives data to a facility on Earth known as the network operations center, or NOC (pronounced “knock”). Because the NOC is linked to the internet (or a private network), all communication from a satellite dish to an orbiting satellite will pass via the NOC before reaching the Internet.

What Exactly Is a Geostationary Satellite?

There is a spot in space where a satellite may be placed in orbit such that it seems stationary from the earth. The satellite circles the Earth at the same rate at which the Earth rotates. The satellite completes an orbiting cycle in 24 hours. Geostationary satellites can only be found 22,300 miles above the Earth’s equator, and nowhere else.

Longitude of a Satellite

To make matters even more complicated, longitude is divided into two halves: western and eastern hemispheres. All satellite orbital ‘slots’ would be between 0° and 180° in both hemispheres. A satellite serving North and South America that orbits above the Galapagos Islands may have an orbital slot of 101° west longitude. The orbital slot of 100.5° east longitude may be assigned to a satellite orbiting above Malaysia that serves Asia and Australia.

Satellite longitudes assist installers in determining where to place a satellite dish. They also aid in the detection of barriers between an installation location and the satellite.

A satellite signal will be disrupted by any obstruction (such as a tree or a mountain). It is critical that there be no obstructions between the satellite dish installation location and the orbiting satellite. In the industry, this is referred to as a clear ‘line-of-sight’ to the satellite. Fortunately, utilizing a look angle calculator simplifies determining whether or not there is a clear line of sight. You can easily find websites that have this tool. All that is required is a current address (anywhere in the world) and the satellite’s orbital longitude.

The look angle calculator will provide you with the satellite’s compass heading, the degrees up from the horizon it is placed, and a cool overhead view of the installation area, with a line indicating the satellite’s direction.

The noticeable difference between satellite service and other land-based ISPs is something termed ‘latency,’ a word often used in the internet business. Latency is simply the amount of time it takes for a single piece of data to make a round journey back and forth via a satellite link. Latency is also known as ping time.

Data transmission via satellite happens at the speed of light (186,000 miles per second). The orbiting satellite is 22,300 miles above the planet, and data must travel that distance four times (computer to satellite, satellite to NOC/internet, NOC/internet to satellite, and satellite to computer). The time it takes is known as latency, and it is around half a second.

Using satellite internet has its unique advantages. It is accessible from anywhere on Earth. This means that even in areas with very limited telecom infrastructure, you can still maintain your connection with the outside world through satellite internet. It is especially useful in remote areas that are away from big towns and cities. You can now avail high-speed satellite internet as well with HughesNnet. They offer download and upload speeds as high as 25 Mbps and 3 Mbps, respectively.

Here’s all we know about WWDC 2022; dates, rumoured features and announcements

Understand the trade-offs with reactive and proactive cloudops

EA is trying to sell itself to a streaming giant, according to reports

5 Times You Absolutely Must Hire An SEO Pro